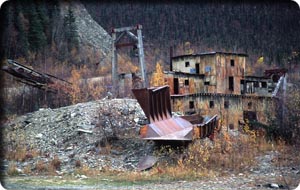 The broad band of land north of the Alaska Range and south of the Brooks Range is known simply as "The Interior." The region features several chains of low mountains interspersed by miles of lowland forest and boggy flats. The spruce forest of the taiga predominates in all but the far west, though most of the land above 3,000 feet in elevation is treeless tundra (the treeline drops in elevation as you move north and west).

Most of the Interior is within the watershed of the mighty Yukon River, the fourth longest river on the continent. The Yukon originates in the Canadian coastal mountains, flowing northwest to Dawson City before entering Alaska on its long run to the Bering Sea. Three roads provide access to the Yukon: the Taylor Highway (AK 5) to Eagle in the east, the Steese Highway (AK 6) to Circle north of Fairbanks, and the Dalton Highway (AK 11), which is the only Alaskan road to bridge the river. Numerous small, mainly native settlements are found along the Yukon’s shores, most largely dependent upon subsistence wildlife harvesting, native corporation income, and government jobs.

Fairbanks is the Interior’s main city and the second largest in the state. Situated on the Tanana (TA-nuh-naw) River, it is a major center of commerce and the primary gateway to all of the Interior and Far North regions. Relatively few package tours visit Fairbanks, but independent travelers benefit from the city’s role as a major highway crossroads and air-transport hub.

Travel into the remote regions of the Interior can be expensive and challenging. While there are excellent options for birders, backcountry lodges serve mainly hunters and fishers. Few backpackers tackle the challenges of trackless wetland and forest, though several villages and mining towns offer possible bases for ridge routes. More easily accessible recreational options include the Yukon-Charley National Preserve and Fortymile region for river running, the White Mountains for hiking, and the hot springs resorts near Fairbanks for soaking.

Scheduled flights, air drop-offs, or extended river travel are required to reach the Interior’s small towns and huge wildlife refuges. Fairbanks or Anchorage are the best bases for such excursions, though Eagle, Circle, Tok, Delta Junction, and other towns offer possibilities. Suggestions are included in the following sections, while specific plans should be developed in consultation with outfitters, pilots, and refuge managers.